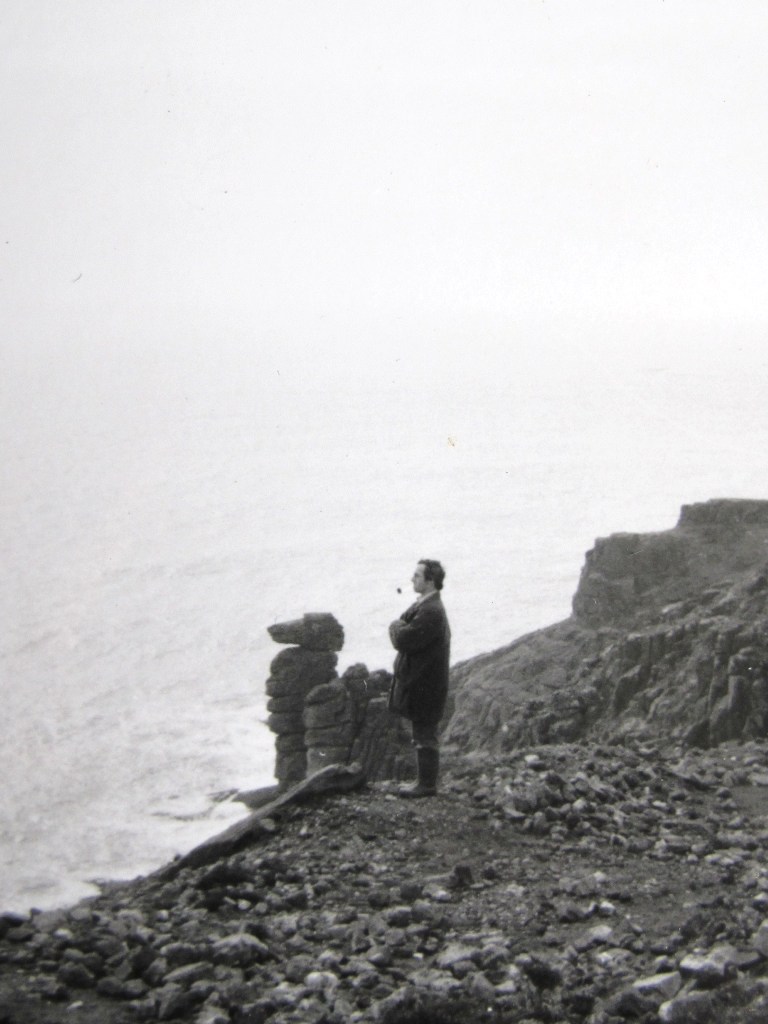 I recall now the silly spontaneity of it. He could surprise you like that. There was a tower of rock where the cliffs fell into the sea. It looked like one of those Indian totem poles, carved into the shape of a dog standing erect as if on two legs, its arms folded defiantly and its long muzzle pointing out to sea; a stony, sentinel carved by an ancient tribe of Atlantis, to ward of unknown forces that might come across the sea. I hadn’t noticed it until my father posed on the cliff edge. He stood in his old tatty Barbour and wellies, tall and straight, with his arms folded, pipe sticking out of his mouth at a horizontal. His outline cleverly mirrored that of the stone figure exactly.

He often used to take my sister and I on these exploratory rambles. He is at it his best then – relaxed, animated, curious. He will stroll along, pipe in hand, scanning the ground and the distance, the near and the far, seemingly taking in everything all at once. Always looking for clues, reading the landscape, trying to figure out some historical puzzle – why the landscape is the way it is, where the old mine workings lie, shafts dug into the cliffs and under the sea in search of tin, the location of some Iron-Age fort. His attention lies both near and distant; rarely on us, but we forgive him for that, happy just to be in his company when he seems so alive, when we are doing something together, away from the mundane. He will draw us into his puzzle gradually, teasingly, and my sister and I will compete to offer our contributions, or attempt to divert his attention to some aspects of our lives we want him to acknowledge.

There is always some danger involved too: a steep, treacherous and little trodden path down the cliffs to negotiate, or a climb to the top of some great brooding outcrop of rock. My father sheds off twenty years and climbs like a mountain goat. One has to be wary of the sudden precipices, great yawning gaps where the sea has taken out a slice from the cliff. If you are brave enough to crawl to the edge and look over you will see a vertical sheer slab of rock that drops straight down for two hundred feet or more and you can hear the sea surging hungrily below. If you are like me, you might suddenly grow vertiginous, imagining your body falling and then hitting the rocks.  I didn’t know think of it then, staring down at the edge of the zawn, but looking back now, I wonder how many more days we three will be together like that.

*Zawn: from the Cornish, for where a slice has been taken out of a cliff by the sea.