To fight inertia he walks. Each time it’s a new beginning. This time the wind howls in his ear, gusting and buffeting him from the west. THINKING, his Inner Critic, becomes louder to try to match the wind. He follows the grassy ridgeway, passes through a gate, over a lane and through another gate, hearing the familiar click of the latch behind him. As he settles into his stride and senses the view and the path opening out before him, leading him on, his thoughts begin to subside. The voice becomes quieter and the space between thoughts grows. He starts to look with interest, he begins to see.

A barbed wire fence runs alongside the path, dividing a field of pale yellow corn stubble from a deep blue-grey sky. A robin clings to the wire, head down into the full force of the wind. Hawthorne trees are bent over, full of shrivelled, ruby red berries. A rainbow appears, briefly, and then he feels rain against his ear. He pulls his hood up, prepares himself for a long, wet walk, then stops and turns around. It’s ok to turn back, he tells himself. The rain passes over quickly and then it’s blustery sunshine again. Hard to describe why the line of the barbed wire with wooden posts spaced at regular intervals, dividing horizontal bands of sky and field, pleases him, or the crooked fence running alongside the stables, the chalky white path glistening with rain, the feel of the fresh wind on his face.

He passes through the stable and has a sing-song exchange with some mounted riders, as they clip-clop down the lane, “Morning, morning, morning, MORning!” Strange, that simple, but joyous statement of the time of day… Like the chatter of birds after the night, letting one another know they are still there, still alive. Dark clouds pass over the valley, then sunlight, illuminating square straw bales stacked in bare fields. Suddenly the wind picks up and sheets of driving rain move in then pass over again. A little way down the path he meets some more riders. One explains with laughter and surprise, how the rain had just narrowly missed them. He struggles for a reply and the rider laughs warmly and wishes him a good day. “I’m out of practice…” he thinks to himself, this easy banter with strangers doesn’t come naturally to him. “I’ve been alone with my thoughts too long, despite rarely having a moment to myself… alone in the company of strangers”. But this minor flicker of self-reproach does not dispel his happiness. This contentment, this sense of being here now, so easily shadowed by regret and worry, how could it last? How could it survive, to permeate everyday life? Or could it only be found here on the Downs, in the rain and the sun and the ever-changing light, in the wind-blown trees and the robin’s red breast? 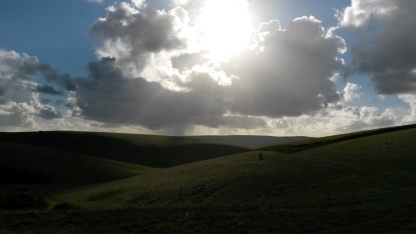 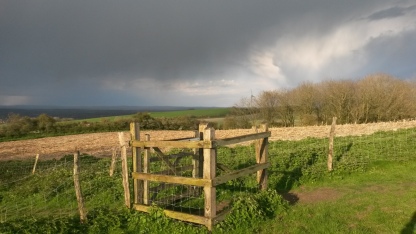 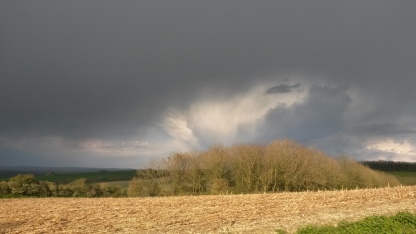 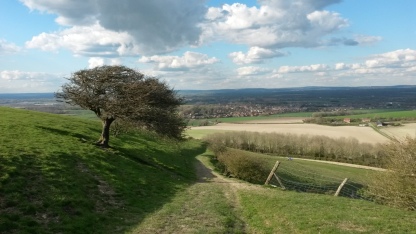